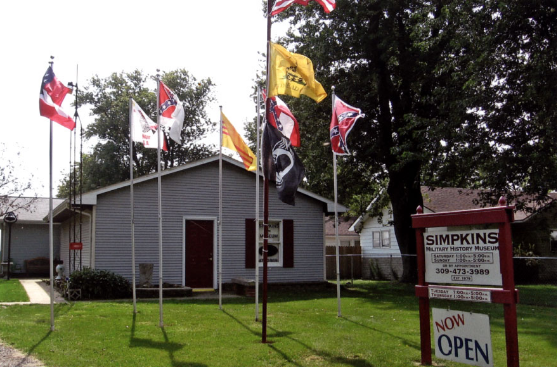 This is the private collection belonging to Gary Simpkins. He started collecting when he was 12 years old. Gary is a veteran of the Viet Nam war. The first item he brought to start the collection was a civil war bayonet. Gary bought it from an antique dealer in 1959 in Heyworth, Illinois for $5.00. He paid the man $1.00 and then gave him $1.00 each week for the next 4 weeks.

The collection started out in his bedroom and then moved to the basement. With the birth of his daughter, for safety reasons, he remodeled the one car garage and moved the museum into it. Upon relocating to Heyworth he was able to build a permanent building to house the museum. The collection became a permanent museum and opened on March 19, 1989. With an addition, it more than doubled in size with a Grand Re-opening on March 19,2006.

Or other times by appointment.