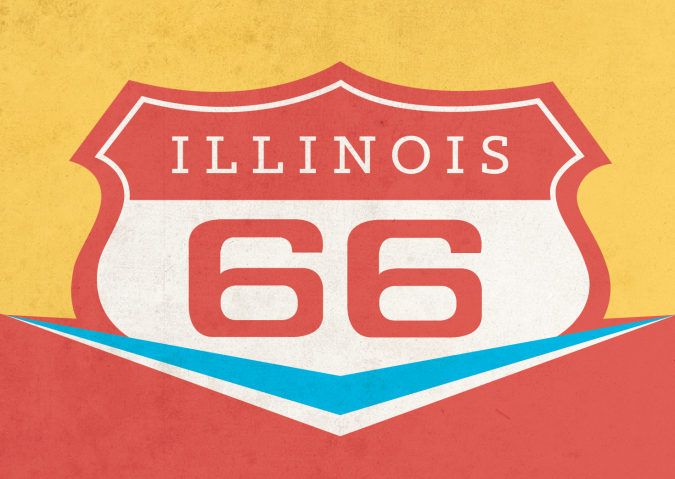 Did you know that the Mother Road runs through both the City of Bloomington and the Town of Normal? Here is the complete list of major and historical attractions along Route 66 in Bloomington-Normal!

Established in Normal in 1971, Avanti’s is known for their home-style pasta, pizza, salads and sandwiches. Their famous trademark is fresh Italian bread prepared and baked in the restaurant kitchen.

2. Bloomington Center for the Performing Arts

The BCPA is the centerpiece of the city’s Cultural District, which also includes a festival park and a creativity center for arts education.

3. Cruisin’ With Lincoln on 66 Visitors Center

Gene’s is known for their amazing soft served cones and the Avalanche. This has always been a favorite family stop on Route 66!

The Arena is a premier venue for entertainment and recreation. The Arena also hosts a variety of sporting events, concerts, ice shows, conferences and more.

ISU, home of the Redbirds, was founded in 1857. It is the state’s first public university and one of the Midwest’s oldest institutions of higher education.

Founded in 1850 and home of the Titans, IWU is a highly selective, residential liberal arts university. Its enrollment is approximately 2,000 students.

Get your kicks on 66 at Kick’s Bar & Grill. This is a great place to stretch your legs and order some of that famous Route 66 road food!

The museum is housed in the old McLean County Courthouse which traces it roots back to 1892. National award-winning exhibits guide visitors through the county’s history in this well preserved architectural building.

Opened in the late 1800s, this city zoo began to house exotic animals after a circus left behind a lion cub. It offers educational classes, special events, group programs and daily feedings to various animals.

State Farm was founded by G.J. Mecherle to provide automobile insurance to farmers. State Farm was inducted into the Illinois Route 66 Hall of Fame on June 10, 1995. This original Art Deco building is still in operation.

The Sugar Grove Nature Center is the largest remaining intact prairie grove in the state of Illinois, with over five miles of trails through the prairie, forest and river habitats. The center has interpretive exhibits,sensory displays and live animals.

Tobin’s, which was established in 1963, is known for its not-too-thick, not-too-thin crust pizza. The red-ripe tomato sauce and buttery cheese create an unforgettable dining experience!

The Parkway is a 1.6 mile stretch of Route 66 with educational kiosks. The walking tour has fliers printed in several languages and a collection of Burma Shave signs.

Originally a market that helped feed locals and Route 66 travelers, this family business is now a full-service florist and garden center that has served the surrounding area since 1949. Casey’s was inducted into the Illinois Route 66 Hall of Fame on June 12, 1999.

A dangerous curve on the original Route 66 before the 1940’s, this curve caught travelers off guard as they misjudged its sharpness and narrow width. Many accidents were caused by travelers speeding on the unfamiliar road.

In 1928, J.P. Walters and John Geske rented part of a mechanic’s garage to sell sandwiches to Route 66 travelers. By the 1930’s, the operation had grown to a full-fledged restaurant with cabins and a cattle pen. The stop, which is the oldest truck stop in America, still serves travelers along Route 66 24 hours a day, 365 days a year.

One of the area’s most popular tourist camps during the early 1920s, Route 66 tourists would use this location as a rest-area and campground.  No longer a lodging zone, it is now a city park populated with mature oak and hickory trees, a playground, and four shelters.

This business was established in 1891. It depended on the steady stream of customers that Route 66 brought to its door. Today, the sirup farm at Funks Grove remains a favorite stop among Route 66 travelers.

Lucca Grill was established in 1936. Customers can enjoy delicious thin-crust pizza as they appreciate the ornate tin ceiling and antique mahogany bar.

This one-mile stretch of original Route 66 was dedicated in 1926. It has been restored back to the 1940’s era with vintage billboard and Burma Shave signs. It can be walked year-round and is open to vehicular traffic during festivals.

Famous for their delicious thin-crust pizza and French dressing, this Monical’s is located at the site of the original Steak ‘n Shake restaurant.

The Quinn family owned and operated this full-service gas station for more than 70 years. The station was inducted into the Illinois Route 66 Hall of Fame on June 9, 2012. Closed today, it remains a drive-by attraction with original memorabilia displayed in the windows.

This landmark opened in 1931 to serve travelers on Route 66. An information center and gift shop will be open in Summer 2017. It is owned by the Town of Normal, is on the National Register of Historic Places, is a Town of Normal Local Landmark and is in the Route 66 Association of Illinois Hall of Fame.