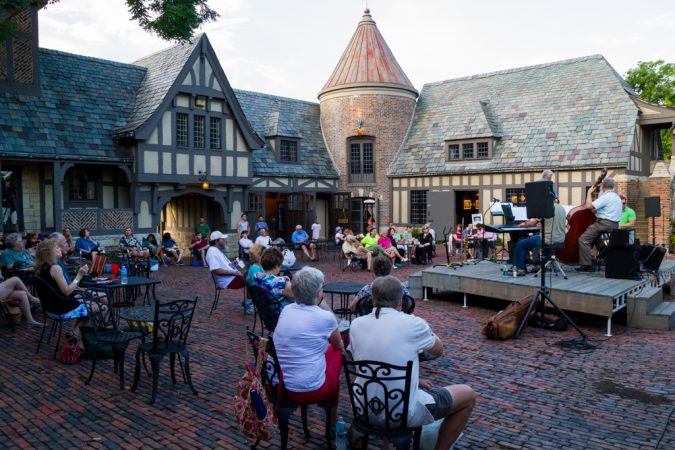 Romance, revenge, comedy, jealousy, murder, action, magic … no wonder William Shakespeare has been popular for over 400 years; his plays have it all.  High school English classes still read Romeo and Juliet each year, and his works are performed all over the world. It’s also events such as the Illinois Shakespeare Festival that keep the works of The Bard alive and well.

This year, the Illinois Shakespeare Festival is celebrating its 44th anniversary. What started out as a production on a tennis court at Ewing Manor in 1978 has grown into a full-blown festival, with behind the scenes tours, green shows, food trucks and a gift shop. Performed at the gorgeous outdoor amphitheater on the grounds of Ewing Cultural Center, the Illinois Shakespeare Festival is a must-see for theatre lovers.

ISF has traditionally produced three mainstage shows each season but is restricted this year by capacity limits in both production spaces, such as the scene shop and costume shop, and performance spaces, including backstage dressing rooms and audience seating. “In line with state and local mandates, we are implementing a comprehensive COVID-19 Safety Plan to keep all of our patrons and staff safe,” says Managing Director Derek R. Munson.

Two plays have been chosen for this year’s festival. Let’s break down the selections:

King Leontes of Sicilia is plagued by an irrational suspicion that Queen Hermione is having an affair with his childhood friend, Polixenes. Leontes lashes out in fury, causing death and destruction in the royal family. Convinced that his newborn daughter Perdita is Polixenes’ child, Leontes banishes her to the Bohemian wilderness, expecting the worst. Yet Perdita survives, holding the key to Leontes’ redemption after 16 long years. Can the remorseful king be forgiven for his past mistakes?

Vienna is in an uproar as Angelo, the Duke’s surrogate, enforces a strict moral code on sex. But Angelo is unable to abide by his own standards and uses his power to compel Isabella to exchange her chastity for her brother Claudio’s life. Set in a disjointed urban world where convents and brothels stand side by side, Shakespeare speaks to our current climate through this story about justice, morality, and mercy.

The season also includes a Theatre for Young Audiences production, A Summer’s Winter Tale by Nancy Steele Brokaw, which will be performed free to the public on Thursday and Saturday mornings at 10 a.m. from Thursday, July 1 through Saturday, August 7, 2021. ISF is also planning a mix of virtual and in-person summer camp options.

Grab your friends, a picnic basket, a bottle of wine, and see Shakespeare under the stars!

In order to provide the safest audience experience, tickets will be sold in ‘pods’ of 1, 2, or 3 reserved seats with 6ft of social distancing between each pod. As a temporary change from ISF’s three-tier ticket structure, tickets for the 2021 season will be sold at the flat price of $25 each. Tickets to preview performances and a limited number of student rush tickets will be available for $15. Tickets will go on sale to the general public at noon on Monday, April 5, 2021. For more information, please visit https://illinoisshakes.com/ or call 309.438.2535.