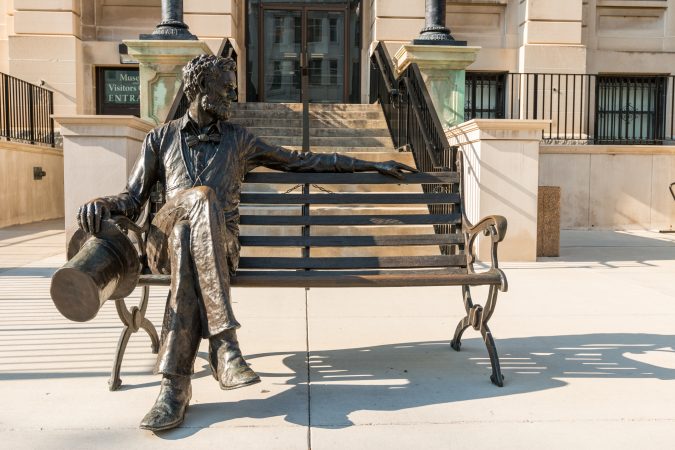 Bloomington-Normal is home to many gorgeous murals, sculptures, and public art pieces. From Downtown Bloomington and Uptown Normal to ISU and IWU campuses, public masterpieces can be found at nearly every corner. Local artists for these pieces range from high schoolers to seasoned professionals! With winter coming, you might want to warm up by perusing our 20+ local galleries in town. Our local artist love opening up their shops on F1rst Fr1days or by appointments to chat with art lovers from near and far!

Come check out these public art pieces that are placed throughout BN: 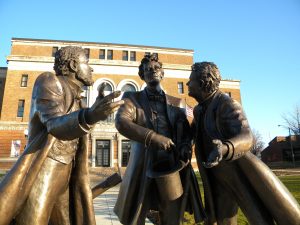 this time, he met two residents who would not only become his close friends, but the most important political backers in his quest for state and national office, Jesse Fell and David Davis. Fell was a businessman who later founded Illinois State University, while Davis was a lawyer who would became an associate justice of the United States Supreme Court. In 2010, a statue titled ‘Convergence of Purpose’ showing the friendship of Lincoln and his McLean County friends Jesse Fell and David Davis was sculpted by Andrew Jumonville and stands in front of the Bloomington Center for the Performing Arts for the public to view. 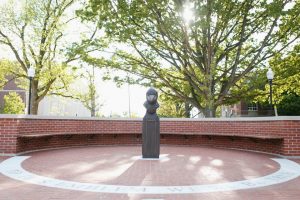 Whether you’re hear for a game, a tour, or visiting family, beautiful artwork can be found throughout both Illinois State University and Illinois Wesleyan University’s campuses. ISU’s campus is home to a newly displayed bronze bust of a Redbird head. This piece was created to be a meeting spot for students to gather. Those who worked on the project coined the term ‘Meet me at the bird.’  Take a short drive over to the ISU Horticulture Center and wander through the public gardens which are filled artwork by students and faculty! There’s several display gardens, a prairie area, Children’s garden and more. You can explore, engage, and educate for a better understanding on how we can make a greener tomorrow! Family with Dog, sculpted by Boaz Vaadia, was installed as a long-term loan to Illinois Wesleyan University in 2014. Shortly after, the sculpture became a permanent gift to Illinois Wesleyan in memory of the late Roger Joslin, who died in 2014. Joslin was the retired chief financial officer and vice chairman of State Farm Insurance and a longtime Illinois Wesleyan trustee. 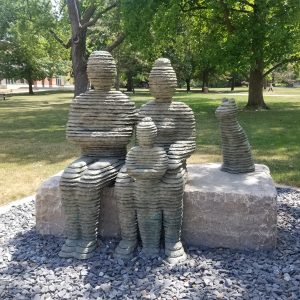 Wandering through Downtown Bloomington will lead you to a variety of masterpieces. In the alley behind Eaton Gallery you will be greeted by a 6-foot tall corn on the cob – a sculpture called Star-Crossed Pollinators, created by Herb Eaton. The brick walls of a Downtown businesses are ornately decorated with colorful murals for the public to view. You will find murals of local public figures, interpretations, and more! Each tell a unique, meaningful story. Cap off your visit of the Downtown public art with a photo-op and chat with President Lincoln! He sits in the Museum Square  ready to welcome you to the Cruisin’ with Lincoln on 66 Visitors Center. Downtown Bloomington is also where you can find many of our community’s artists. Check out the list of our local art galleries here. 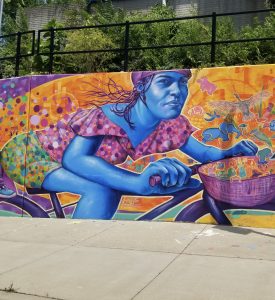 Only a few blocks west of Downtown is a newer mural created by 20 young local artists from the Youth Mural Project! The bright mural was designed and overseen by Joel Bergner of New York, the co-founder of Artolution.

A day spent admiring our outdoor art is a day well spent. There’s so much beautiful art to explore when you #VisitBN!