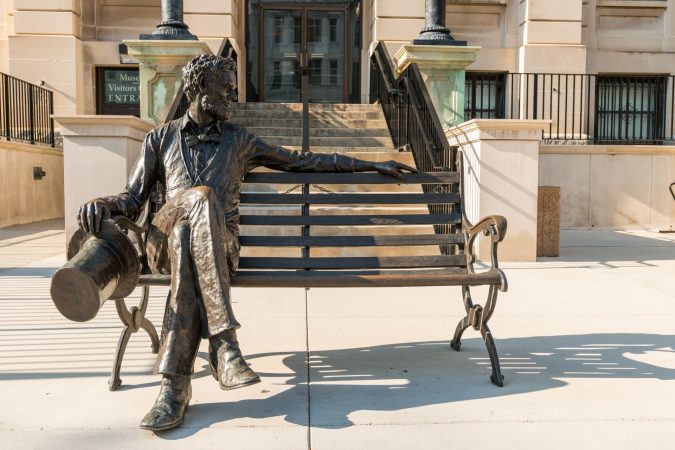 Abraham Lincoln made his first visit to Bloomington-Normal in 1837 when he was a lawyer on the eighth judicial circuit. During this time, he met two residents who would not only become his close friends, but the most important political backers in his quest for state and national office: Jesse Fell and David Davis. According to Fell’s recollection, in 1858 he spotted Lincoln coming out of the McLean County Courthouse (which is now the McLean County Museum of History) and invited him to the law office of his brother. It was at that meeting that Fell told Lincoln that he should run for president.

Just a few steps away from where that meeting took place is the site of Lincoln’s Festival on Route 66, a festival that entertains and educates the public about Lincoln’s connections to Bloomington-Normal. The festival has expanded to include Route 66, its ties to our community and how transportation on the Mother Road expanded growth in our area.
Barb Adams has been involved with the festival since its inception in 2009 and now serves as its chair. Her interest in Lincoln began when she worked in Downtown Bloomington. “With all the Lincoln connections that surround you there it is hard not to be excited about it,” Adams said. It’s not just locals who are drawn to the local Lincoln story, but outside visitors as well. “The story of Lincoln in Illinois appeals to tourists especially because they enjoy visiting the land where Lincoln became a statesman,” said Adams. “The story of a rail-splitting politician, who opposed slavery, also appeals to tourists from diverse cultural backgrounds.”

A newer draw to the festival is the addition of Route 66. “The story of Route 66, coupled with the Lincoln story, has the potential to attract tourists from around the nation and the world,” Adams said. Bloomington-Normal has 13 major and 11 historic sights along Route 66, which are highlighted on a self-guided driving tour map that can be found on our website.

In addition to the festival, Bloomington-Normal is a gateway community in the Abraham Lincoln National Heritage Area, and has 13 stops on the Looking for Lincoln tour, including the David Davis Mansion, the Asahel Gridley Bank and Miller-Davis Buildings and Illinois State University. Most of these locations are in Downtown Bloomington, which serves as a backdrop for the Looking for Lincoln Audio Tour. This tour highlights the locations in Bloomington-Normal that played an important role in shaping Lincoln’s destiny. The CD can be purchased at the McLean County Museum of History.

For more information about Lincoln, Route 66 and other summer festivals, go to our website at VisitBN.org.