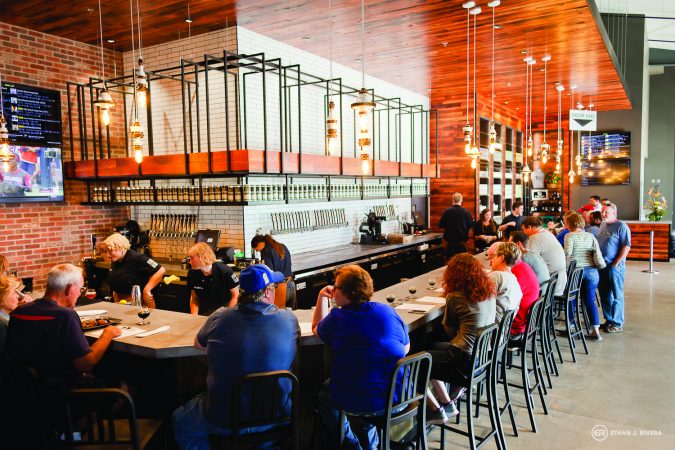 Breweries are popping up all over the country, including Bloomington-Normal. DESTIHL has been a favorite in BN since 2007, but their brewery that opened in May 2017 has only increased their popularity. Smaller breweries are also joining in on the action, including Lil Beaver Brewery and White Oak Brewing. BN is the perfect place to sit back and relax with a cold one!

DESTIHL Brewery:
DESTIHL’s 6,700-sq.ft. facility features bottles and draft releases of pilot, experimental and barrel-aged beers, which pairs well with its menu of bold flavored, American-inspired pub fare. If you want a more in-depth look at the brewery, tours are available. The first option is a guided tour with beer tastings, and the second is a comprehensive tour of brewery operations that is followed by a sampling of beers and culinary creations. DESTIHL also hosts events, including weekly yoga sessions in the summer and the Field Day Beer Festival.

Keg Grove Brewing Company:
Keg Grove’s selection includes refreshing ales, bold IPAs and classic American styles. Because of their location in central Illinois, they make corn an integral part of every beer they make. Their mission is to serve as a community-centered brewery, dedicated to crafting beer for everyone.

Lil Beaver Brewery:
Lil Beaver Brewery is a little brewery with big flavor. They brew what YOU want to drink. Their specialty is stouts, specifically imperial. Lil Beaver is fairly new, opening in January 2018, but they already have a dedicated following. Their most requested flavors are Strawberry Wainbows, a hazy IPA with strawberries and lactose, and Happy for Pecans.

White Oak Brewing:
White Oak Brewing is rooted in Central Illinois; their distribution is focused on this part of the state. Their taproom is a relaxing place to gather with friends and family. Their relaxing outdoor patio space makes White Oak Brewing a hidden gem among Twin City craft-beer lovers.