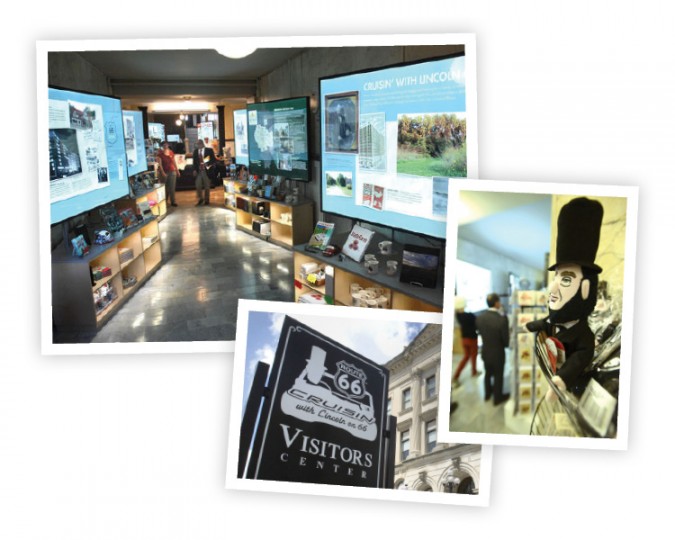 Cruisin’ with Lincoln on 66

The Bloomington-Normal community is getting their kicks on Route 66! The McLean County Museum of History, the Bloomington-Normal Area Convention and Visitors Bureau and the Illinois Office of Tourism have partnered together to open a new Route 66 and Abraham Lincoln themed visitor center on the first level of the museum. It was a collaborative effort by many and it has been long overdue, but we now have the opportunity to share our Route 66 and Abraham Lincoln story with visitors throughout the world.

Bloomington-Normal is considered a Route 66 community as the internationally recognized highway runs through both the Town of Normal and the City of Bloomington. Running about 2,400 miles from Chicago to Santa Monica, California, Route 66 has become an American and international icon and pilgrimage. In June 2011 a study was conducted by Rutgers, The State University of New Jersey in collaboration with the National Park Service Route 66 Corridor Preservation Program and the World Monuments Fund. The study educates us on the historic preservation, economic landscape and heritage tourism of Route 66. This study indicated that average spending for Route 66 tourists was $1500 – $2000 per trip. Annual direct economic effects from Route 66 spending include $27million in museum spending alone. There are 450 museums along Route 66. The median annual number of visitors to Route 66 Museums was 7,500. Traveler origins indicated 84.7 percent of visitors were U.S. residence while 15.3 percent came from abroad. The largest number of visitors from abroad came from the United Kingdom, Germany and the Netherlands.

Our new visitor center, Cruisin’ with Lincoln on 66, opened in April 2015. The visitor expenditures are estimated at $2.5 million with an increase of 25,000 additional visitors. The visitor center includes one wing dedicated to Route 66 and one wing dedicated to Abraham Lincoln with cohesiveness in décor.  Historical exhibits, informational videos, a gift shop, and visitor information are all available in the center. The Museum is open Monday, Wednesday, Thursday, Friday and Saturday from 10 a.m. – 5 p.m. and is open Tuesday from 10 a.m. – 9 p.m.